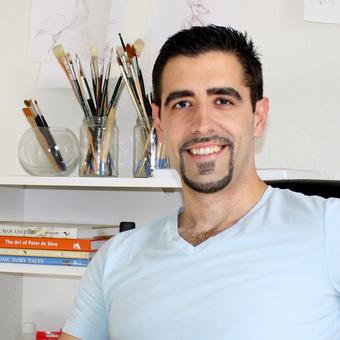 All images on this web site are copyrighted by Angel M. Alvarez. Unauthorized duplication is strictly prohibited.

Born and raised in South Florida, Angel began drawing at an early age influenced by animated features, Saturday morning cartoons and Sunday comic strips. The son of immigrant parents, his first language was Spanish, growing up in a large Hispanic community.  His artistic abilities were recognized early on and Angel was admitted to one of the top ranked art magnet programs in the nation; Design and Architecture Senior High.  Angel attained his Masters in Fine Arts in Illustration through the Prestigious University of Hartford program. He now specializes in children’s illustration; his work reflects an interest in visual storytelling and humorous characters. In 2015, he was selected by Simon and Schuster Art Director as the first place Florida SCBWI rising kite winner in illustration. In 2016, he would follow that up with a Florida SCBWI rising kite honorable mention.

Angel teaches Digital Art and Animation at North Broward Preparatory School in Coconut Creek, FL. He also teaches Cartoon Drawing and Illustration workshops at the De Vita Academy of Art.  In 2017, he created Cartoon Drawing Studio as a way to share his passion for drawing cartoon characters.

Angel still lives and works in South Florida. Angel's biggest inspiration is his family including his three kids, wonderful wife and puppy.